From Symphony of War Wiki
Jump to navigation Jump to search

Units are the individual soldiers in Symphony of War. Up to 9 units can be grouped into a squad.

Classes within specific types can be upgraded. Class upgrades come from Class XP (CP) gained through combat or CP items, which leads a unit to class mastery. Once that class is mastered, and they have the prerequisite stats and the army has the resources for it, the player can upgrade into higher tiers. Further still, once a tier 3 unit has reached max mastery it can be upgraded one last time using a Proof of Merit, giving it a substantial all around stat boost but it can never change classes again.

If units fall in battle, they will be out for the rest of the chapter, and revived during the next Home Base sequence. They can also be revived at Temples.

If a non-story unit dies while Permadeath is enabled, the unit will no longer be available for use. 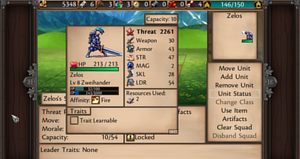 Retrieved from "https://symphonyofwar.wiki.gg/wiki/Unit?oldid=288"
Category:
Cookies help us deliver our services. By using our services, you agree to our use of cookies.