From Symphony of War Wiki
Jump to navigation Jump to search

Symphony of War is a 2D turn-based strategy RPG game with a storyline that takes place in the world of Tahnra.

The player's character is the Hero of Legend who manages a squad-based army to complete a 30-40 hour campaign that can be replayed. They interact with a number of factions and can upgrade and customize the army by improving the unit classes thanks to the Faction Rank. 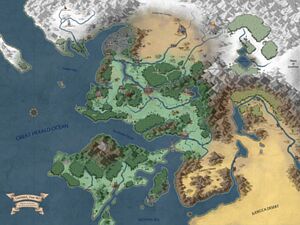 The lands where the storyline takes place

At the turn of the millennium, the world of Tahnra is headed for a reckoning. The long and bloody conflict of Veridian Succession left the Empire of Veridia scarred, its people subject to brutal hardships. Under the reign of Empress Florina, the vicious cycle seemed to be broken, until a rogue General abducted her from the capital, mustering his own armies and raising the flag of rebellion. You, a young academy graduate, will command an expedition against these forces… a conflict that will set off a chain of events and shake the very foundations of the world.

Retrieved from "https://symphonyofwar.wiki.gg/wiki/Symphony_of_War?oldid=158"
Category:
Cookies help us deliver our services. By using our services, you agree to our use of cookies.